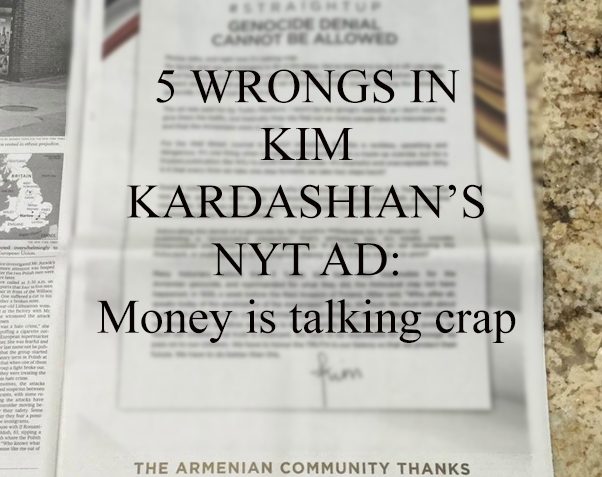 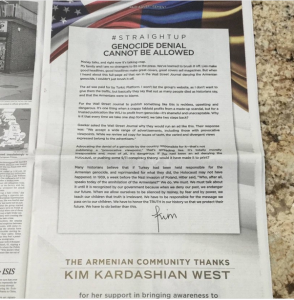 Kim Kardashian, the US celebrity who has been described as perhaps the world’s most famous Armenian, has taken out a full-page ad in the New York Times urging the tragic events of 1915 in the Ottoman Empire to be officially called genocide.

The ad in Saturday’s edition and titled “Genocidal Denial Cannot be Allowed”, was in response to an ad in the Wall Street Journal in April by the Turkic Forum rejecting the use of the term genocide.

There are five things wrong with the ad, which bears her signature:

1. “Advocating the denial of a genocide by the country responsible for it …”

Countries do not commit genocide. Individuals bear responsibility. That is why the wholesale accusation against the Ottomans, the Turkish Republic and the Turkish people is wrong.

Genocide is a precisely defined legal term. Only competent courts, such as the United Nations’ ICTY, can deliver a verdict on this.

There has been no such verdict against the Ottomans, the Turkish government OR any individuals in relation to Armenian claims during the past 101 years. So, technically, it is not genocide. Australia, along with the US and more than 100 others, is one of the nations around the world that do not formally accept the use of the word genocide in relation to the evens of 1915.

Historically as well, it is an ongoing debate. Again, among historians there is no consensus on whether or not to label the tragic events of 1915 as genocide.

Some Armenians, including Kim Kardashian, want a guilty verdict without trial against a whole nation.

2. “Who, after all, speaks today of the annihilation of the Armenians?” 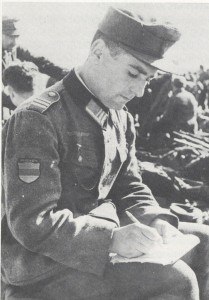 The remark is attributed to Adolf Hitler in 1939. Hitler did not utter these words. This is a classic example of  fabricating history by some  Armenians.

There is no proof that Hitler ever made such a statement. The attributed quote appears only in one of the three documents from Hitler’s 1939 Obersalzberg Speech. The Nuremberg tribunal deemed the document with the attributed quote to be a forgery and dismissed from the evidence, as the source of the paper was unknown and it differed substantially with the other two copies.

3. “When we allow ourselves to be silenced by money, by fear and by power …”

There is also the case of Armenian terror groups that promoted fear for decades.

From the 1970s to the mid-1980s, Armenian terror groups carried out numerous TERRORIST attacks around the world, including more than a dozen on the US soil and two in Australia.

In the wave of these TERROR attacks around the world, at least 46 people were killed and 300 injured. Car bombs, explosive devices and guns were used to silence Turkish voices and scholars who questioned their version of history.

They sought “revenge” on people who were born years after the tragic events. Both the Justice Command for the Armenian Genocide (JCAG) and the Armenian Secret Army for the Liberation of Armenia (ASALA) received widespread support from some members of the Armenian diaspora in the US and elsewhere according to widely cited intelligence reports. 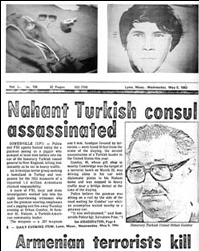 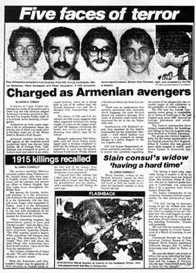 To “silence” the late Professor Stanford Shaw, who was a known critic of the Armenian version of history at University of California, unknown assailants bombed his home.

In fact, it is Turkey who wants this tragic chapter of history to be researched and debated openly. It is the Armenian diaspora who wants to silence anyone opposing their version.

Follow this link to learn more about the Armenian terror groups in CIA reports.

4. “Many historians believe if Turkey had been held responsible … the Holocaust may not have happened”

The most serious legal attempt to punish those who perpetuated the alleged crimes was the Malta Tribunals and the cases there collapsed due to lack of evidence.

Special trials were set-up by the British in Malta in 1921. They wanted to convict Ottoman war prisoners of crimes against humanity. But the British prosecutors concluded that there was not enough evidence to prosecute any of the POWs. Subsequently, they were all released.

We believe drawing similarities between the tragic events of the 1915 and the Holocaust shows the utmost disrespect to the survivors of the Nazi regime.

We believe unless all parties acknowledge and take responsibility for their part in the suffering of innocents, the world will continue to see more atrocities such as the ones in Syria, the Azerbaijani city of Khojaly, Sudan, Bosnia and the Congo.

Kim Kardashian, thank you for your brutal honesty and introspect! 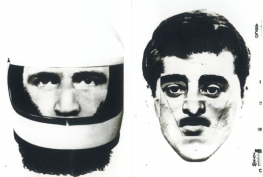