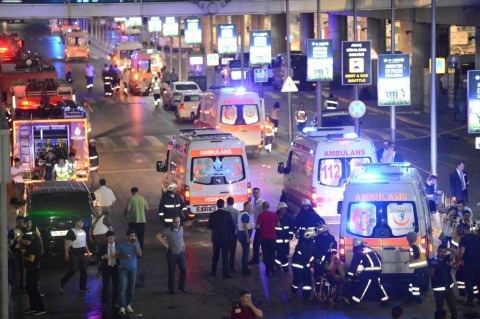 The Australian Turkish Advocacy Alliance (ATA-A) condemns the latest terrorist attack in Istanbul and calls up on all community organisations and leaders to take a stand against this gross assault on human life.

There are no excuses to justify the violent acts against human life.

This attack was not only against Turkey but the citizens of the world as terrorists stormed one of Europe’s busiest airports airport with guns, hand grenades and suicide vests.
Video footage of the event reportedly shows security guards fighting off at least one of the attackers.
The attack has left nearly 50 people dead and many more injured.

Among the many expression of sympathy, a phone call has touched us all in particular. Australian Vietnam War Veteran Lindsay Gazzard from Paramatta, NSW wanted to express his sympathies personally and called ATA-A.
On a day like this the conversation with Mr Gazzard and his warm words mean a lot to us, more than anything else. It is encouraging to know we are all together against these kind of evil acts.
It is comforting to know that the people of Turkey are not alone in their never-ending fight against terror.

Mr Gazzard told us to ‘stay strong’ and we will, knowing people who believe in the value of human life outnumber those who murder and massacre the innocent to make political statements.

We are grateful to all Australians who stand by us in solidarity during yet another hard day like this.