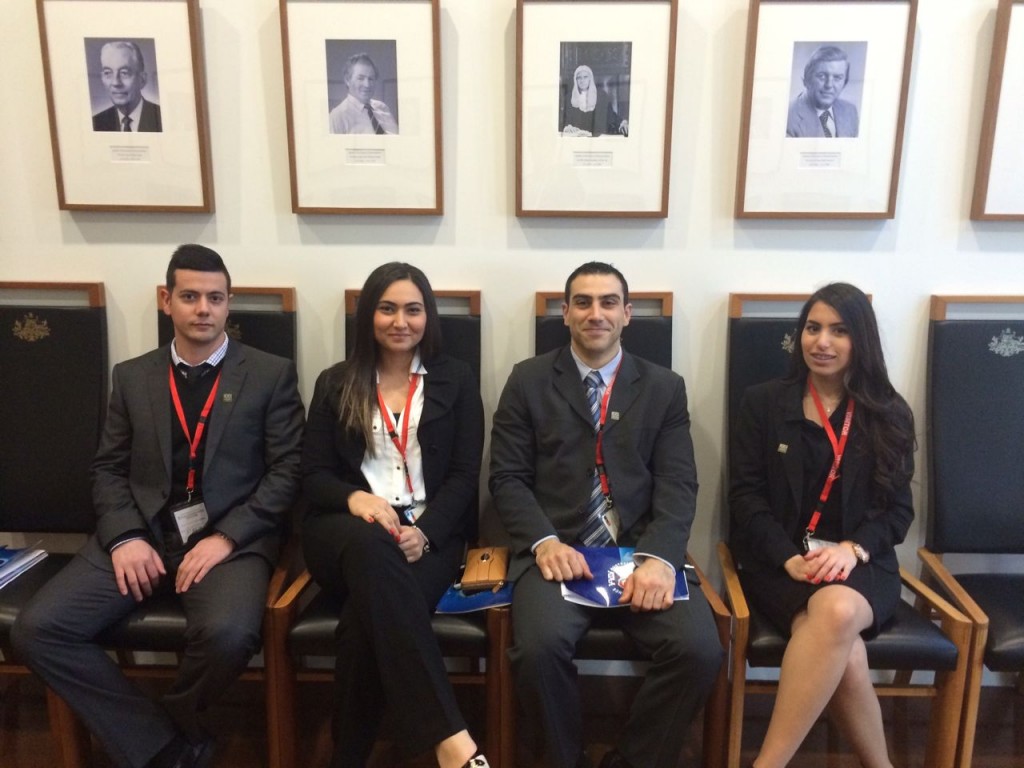 Last week Australian Turkish Advocacy Alliance (“ATA-A”) engaged in its first ever “advocacy week” in Canberra. ATA-A CEO Mr Ertunc Ozen, Executive Secretary Gunes Gungor and the members of the Youth Council has met with almost 40 politicians and bureaucrats which include Government Ministers, Senators and MPs in an attempt to present the matters of interest to the Australian Turkish community to them.

Mr Ertunc Ozen, CEO of ATA-A said about the advocacy week : “this week has been a great success and we couldn’t imagine the positive responses we got from the politicians. We believe that all of our messages were received well, and welcomed by the people we met” Mr Ozen added: “At a time when we celebrate the 100th year of the friendship of Australia and Turkey, ATA-A welcomes the support of both the Government and the opposition on the matter we raised on behalf of the Australian Turkish community.”.

One of the young advocates, ATA-A Youth Council member Tony Tarhan was also impressed by the response. Tony says : “Most of the politicians we’ve talk to, expressed their gratitudes to see young Australian Turks advocating for their own communities.” , he adds “We thought that we had no voice in the Parliament, this may still be partly true for the NSW but the Federal Parliament is full of Friends of Turkey and Australian Turkish people.”

ATA-A Executive Secretary Güneş Güngör said that the impression they got from the politicians and their advisers was that the events of 1915 will not be in the agenda of the Parliament for a long time. Güngör says : “MPs who were generous enough to give us some time to present our views will hopefully now understand that our position is not reflected in the caricature that the Armenian and other lobby groups portray it as. A significant part of our efforts was to attempt to dispel myths and untruths and invite people to consider only facts.” and he adds: “We reached out to the members of the Parliament to say that the parliaments should not legislate history but instead encourage the parties involved to resolve the conflict through dialogue.” Güngör reminds that countless efforts of ATA-A to also reach out the Armenian Diaspora in Australia was not fruitful and asks “Every time we try to get one step closer, they start running away, why are they so afraid to talk?” Güngör says “As always we welcome dialogue and informed debate.”

Record number of Politicians attended to Friends of Turkey Reception

During the Advocacy Week, ATA-A has also held a “Friends of Turkey Reception” to where almost 20 MPs and Senators attended including the members of the Australia Turkey Inter Parliamentary Friendship Group.

The hosts of the reception were the chair and the vice chair of the Parliamentary Friendship Group Mr Craig Laundy , Member for Reid and Mr Rob Mitchell, member for McEwen. At the opening address Mr Laundy said that although his constituent, Reid, has almost 1/3 of the Turkish population in Sydney, he believes that all of the MPs in the Parliament are Friends of Turkey and Turkish People. Mr Laundy also praised the works of ATA-A and the youth involvement to the advocacy efforts.

At his speech Mr Ertunc Ozen said “ We don’t want the parliaments to issue divisive motions legislating history from 100 years ago, we think that this will open the pandoras box. We have a multicultural society, and have communities from all over the world. If the Parliament passes a motion legislating one part of history, then who can guarantee that other communities will not want other motions and all of a sudden our parliaments, instead of making laws and govern the country, will turn into a History Department, the politicians should let the academics decide over an issue which still does not have a consensus.”

The MC for the night ATA-A youth council member Cigdem Ayikol said that this year “Friends of Turkey” receptions will be held in all of the parliaments in the country to celebrate the 100th year of the Friendship of Turkey and Australia. She also reminded that 2015 is the year of “Turkey” in Australia.

Dr Jennifer Lawless, a Churchill Fellow, who is also the co-author of a number textbooks that were awarded the NSW Premiers History Prize and the Australian Publishers Prize has given a keynote address at the reception on her upcoming book : “Kismet : A Story of Gallipoli POWs” where she researched through the lives of the prisoners of war at Gallipoli campaign. She said “The myth of the bad treatment of the Gallipoli POWs after World War 1 is refuted with this book. I have researched the lives of the POWs at the Gallipoli campaign at both Turkish and Australian archives and found that the POWs were treated in a way which is better than many international standards, and this was no where near the treatment of our diggers after WW2 by the Japanese.”.

The word of thanks was delivered by the member for Wills, The Hon. Kelvin Thompson who said that he has had an excellent connection with the Turkish community since 1970s and it was a delightful experience to attend to the “Friends of Turkey” reception which was held for the first time in the Australian Parliament.