DFAT Releases internal communications on the Event of 1915 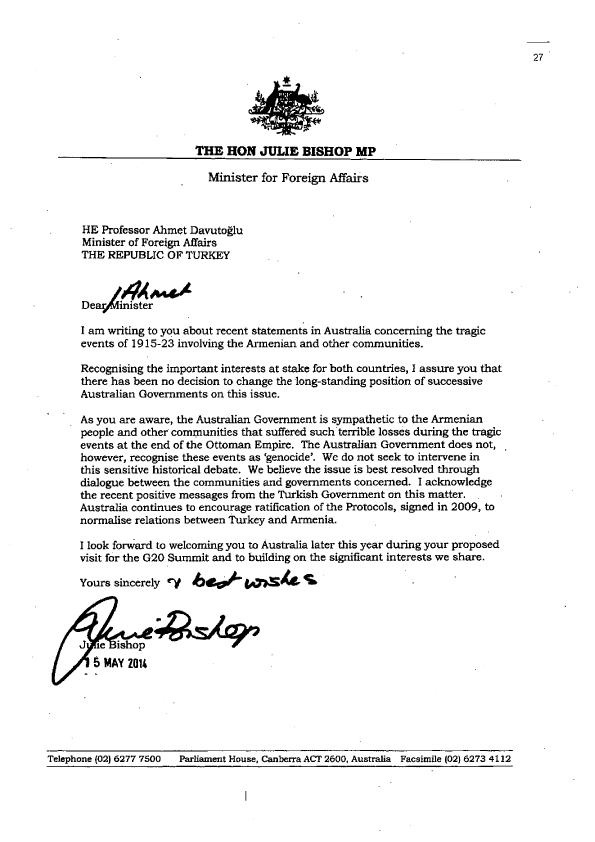 Department of Foreign Affairs and Trade released internal communication documents about the “Events of 1915” under the Freedom of Information request made last month. The document can be reached at DFAT website .

The letter requests DFAT to disclose “ANY” correspondence about “Armenian Genocide” and or “Armenian Massacres” from 1 January 2014 onwards.

The document which mostly consists of communications between the DFAT office in Canberra and the Ankara Embassy shows that (then) Prime Minister Erdogan’s Ambassador’s Summit remarks in February dominated the correspondence. In opening address, Erdogan made a special reference to 2015 as a year of “black propaganda” against Turkey.

The documents also show that DFAT had an interest in the Perincek vs. Switzerland case. In one comment it says “the decision of European Court of Human Rights provides some relief to Turkey in countering the Armenian genocide allegations, but it still faces international political pressure which we would expect to increase in the lead-up to 2015.” The “unclassified” routine information paper also states that only 21 countries [out of 190] in the world recognises the events of 1915 as “genocide” and this does not include some countries with strong Armenian communities like Bulgaria, Brazil, Spain and Iceland.[To this list we can include : United States of America, United Kingdom, Australia and New Zealand]

The documents also includes Foreign Minister Julie Bishop’s letter to (then) Turkish Foreign Minister Ahmet Davutoglu on 15 May 2014. Ensuring that there has been no decision to change the long-standing position of successive Australian Governments on the issue, Ms Bishop states that “Australia “does not recognise these events as ‘genocide’.” The letter comes after the Turkish Community’s NSW Parliament protest in 2014 which gathered thousands to protest the motion NSW Parliament passed the previous year. A similar letter was sent to ATA-A to ensure the AustralianTurkish Community that Australia, “Does not recognise the events of 1915 as ‘genocide’ ”.