Fairfax Media reported on Tuesday August 12th, that according to the newly released archives by UK’s Churchill College, the late Armenian Archbishop Aghan Baliozian, Primate of the Diocese of the Armenian Church of Australia and New Zealand, was a KGB spy. In the papers of former KGB archivist and defector Vasili Mitrokhin, Archbishop Baliozian was listed as a KGB agent, codenamed “Zorik”. 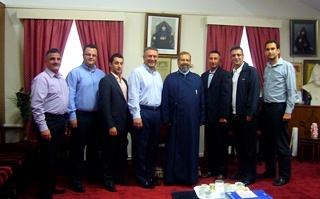 THE “KGB SPY” WAS A REGULAR AT THE NSW PARLIAMENT

Embarrassing for some members of the NSW Parliament, KGB Spy Archbishop Baliozian was their regular guest to the NSW Parliament. Many NSW political figures read tribute to the archbishop, with Liberal MP Jonathan O’Dea ,Chair of the Armenia-NSW Friendship Group, applauding his commitment to inter-religious dialogue as well as his abilities as an orator.

“Always approachable and gregarious, the archbishop was captivating as a speaker… He would simply speak from the heart, capturing the attention of young and old in his congregation and developing a strong and loyal following,”

Mr O’Dea told the NSW Parliament on October 16th, 2012 on his “Tribute to Archbishop Aghan Baliozian”. On his speech, Mr O’Dea did not mention the Archbishop’s works for KGB when he summarised the his life but concluded :

“I am sure I speak on behalf of all who knew him, Armenian or not, when I say that Archbishop Aghan Baliozian was most skilled in the art of communicating.”

, very skilled indeed. Mr Jonathan O’Dea and Rev Fred Nile hosted the Archbishop at series of luncheons and lectures at the NSW Parliament on various occasions.

OUR MPs ARE BEING USED FOR A FOREIGN NATION’S POLICY

It has always been our position that the lobbying efforts by the Armenian Lobby and others has been a fairly blatant attempt to exploit the good name of this country internationally for aims that have nothing to do with the promotion of the welfare of Australia or its citizens. In other words, attempts to have the allegation of genocide “recognised”, are really an expression of a foreign power’s foreign policy interests. These foreign interests may be those of the Armenian Republic, or indeed, another state. Either way, we say it is an inappropriate exploitation of NSW’s good name and Australia’s good international standing. In neither case is it in the interests of the people of this state. Whether or not the Armenian Lobby and others enjoy close relations with foreign powers, their actions have the effect of making NSW part of a program to further the interests of those foreign powers.

Whilst we understand and appreciate that any member of NSW Parliament would try to honestly and faithfully represent their constituents, it should be clear from at least the current revelation concerning the Archbishop that not all lobby attempts are truly what they seem. We ask our MPs not only to consider this for themselves, but perhaps remind other members of their parties, the next time the very well organised Armenian lobby makes demands of their parties for “recognition”, that they may have aims extending well beyond what NSW Parliamentarians might be intending. We do not want NSW to become an inadvertent player in international politics.