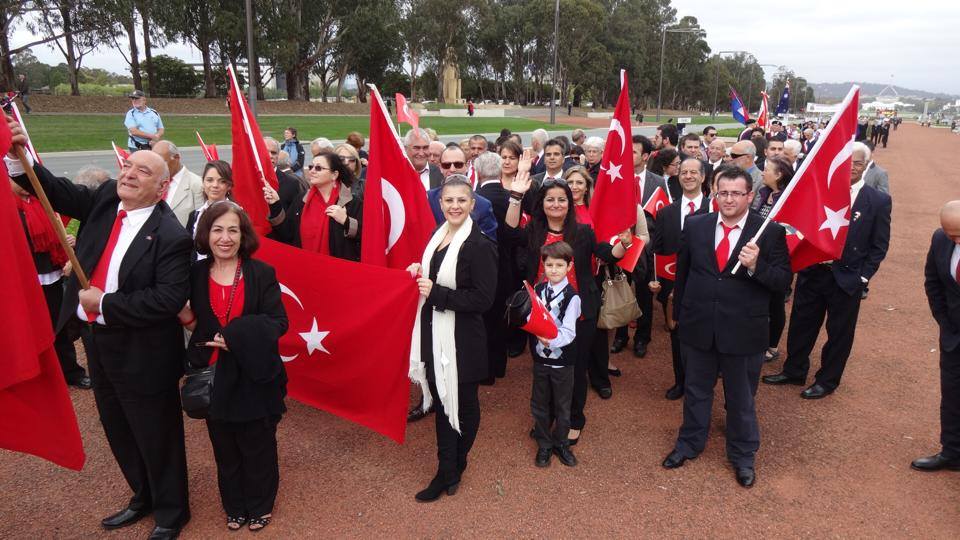 Australian Turkish Advocacy Alliance (ATA-A) represented the Australian Turkish Community at the Anzac Day Parade at the 99th anniversary of the Anzac Day Commemorations held at the Australian War Memorial Museum in Canberra. A group of nearly 70 Turks saluted the crowds watching the parade with Turkish Flags. It is the first time that the Turkish Community attended the parade with a large group of members.

The parade took almost 2 hours and was watched by Governor General Sir Peter Cosgrove and Lady Cosgrove, Prime Minister Tony Abbott, Duke and Duchess of Cambridge Prince Williams and Kate, Turkish Ambassador Reha Keskintepe and Commander of Turkish Navy Admiral Serdar Dulger and other ministers, members of the Parliament, army generals many other dignitaries and thousands of Australians. At the parade Turks were the 69th after United States and were welcomed by the crowds, sometimes even with standing ovations. Turkish Senator Mr Mehmet Tillem and ATAA Youth Council also attended the parade with the Turkish marchers. The highest ranking Turkish army general ever who attended the parade from Turkish Republic, Commander of Turkish Navy Admiral Serdar Dulger said he was very proud to see our citizens were being represented in such a great way at the Anzac Parade.

Apart from Turkey, representatives of the Nederland, the United States Poland and South Korea were also present at the parade. Turks were prominent with Turkish flags in their hands wearing red ties. Some of the Turks who attended the parade also wore the War Medals belonging to their families. Mr Cetin Uckan, whose grandfather is returned serviceman fought at Gallipoli said : “ My grandfather is Gazi Seyit Uckan from Beypazari, and as the eldest grandson of the family I am wearing his medal with great pride.” ATAA CEO Ertunc Ozen expressed the value of understanding Ataturk saying : “Almost 100 years after the War, we are here at the capital of Australia, being welcomed by Australians with standing ovations, of course this makes me proud. But it also proves to what extend Ataturk’s vision reaches when he said those famous words.” One of the 94-year-old members of the parade Mr Yasar Kaya said he was one of the first Turks who came to Australia and added : “I may be here today, but may be not tomorrow, Anzac Day is the most important day for our presence in Australia, it is my request to the Turkish Youth in Australia that they shall attend to those ceremonies where ever they are.”. One of the leaders of the ATAA Youth Council Mr Tarkan Fahri said : “Unfortunately neither Australians nor us realise enough the importance of what our forefathers did for us, for this reason Anzac Day is very important and everyone should attend to the commemorations.” 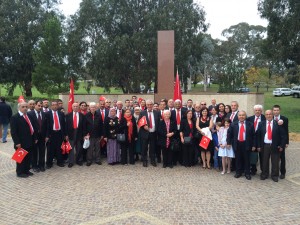 After the march, ATAA members laid a wreath the Ataturk Memorial across the War Memorial Museum, and observed a minute of silence for the memory of Ataturk and those lost their lives in the defence of their countries and they sang the national anthem of Turkey. After the floral gifts were laid, one of the members read a poem she wrote for Ataturk. 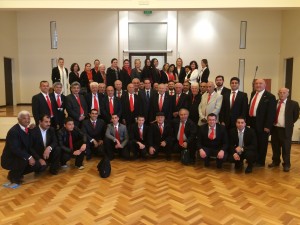 The members of the Turkish Community then attended to a lunch cocktail at the Lalezar Salon of the Turkish Embassy in Canberra where they were welcomed by Turkish Ambassador Reha Keskintepe and his wife. They returned back to Sydney after the lunch.