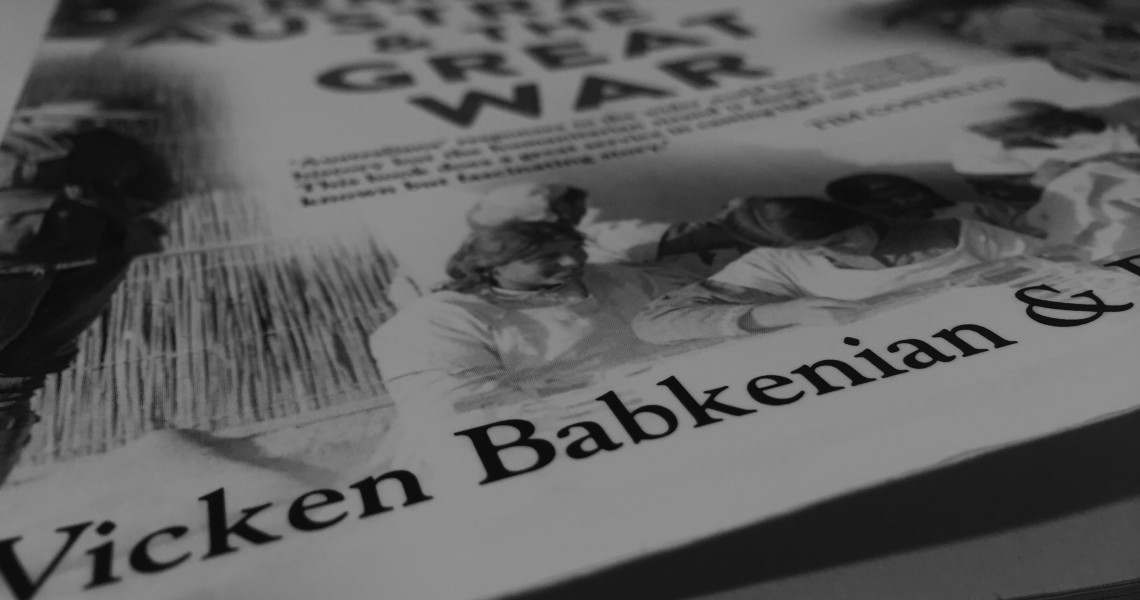 Armenian Propaganda and the Anzacs

‘‘Friends tell the truth’’ but don’t let the truth spoil a good story!

History without contextual understanding serves to no purpose, else than furthering the narrator’s biased agenda. Most of the respected academics today are aware of the hardships of understanding the events of the past. As more research done on contentious subjects such as the events of 1915, the debate grows. Some documents are proven to be false or numbers are being challenged. New evidence provides new perspectives to singular events that shape the understanding of bigger tragedies.

Professor Peter Stanley and his protégé Vicken Babkenian co-authored a book called Armenia, Australia and the Great War. The aim of the book is not to further our understanding of the events of 1915. The authors aim to draw Australia into a foreign and contentious debate. They want Australians to have a biblical belief in their side of the story.

Babkenian and Stanley are using media and the floors of NSW Parliament with the support of the Armenian lobby, to ‘lecture’ Australians about how to see the events of the past.

The book, sadly, does not provide any new evidence to the case. It only builds a new narrative by using the Anzacs for the same old tale. Stanley writes in his Epilogue:

‘We are told by deniers that it can’t be genocide because there is no evidence…it is true there is no single document…the absence of proof, as historians say, is not proof of absence’ (P 280)

By deniers, he means us, the Australian Turkish community, and freethinking people who question mainstream narratives. First of all, one should not forget that we do not deny great tragedies happened during the collapse of the Ottoman Empire. Millions of civilians living peacefully for centuries under Ottoman rule had to flee brutal uprisings, wars. However, Armenians in Diaspora continue to raise their pain above others’ and want the world to recognize a tragedy that affected more than five million people as theirs and theirs only.

To this date, as Stanley points out, genocide advocates failed to provide one single official document that would prove Ottoman government’s intention was to exterminate Armenians in 1915 or any other day. According to the respectable international courts, genocide is a precisely defined legal term and one has to prove ‘intent’ for the destruction of a community for any event to be labeled as genocide. This crucial point is the most contentious part in this debate. There is not a single official document that can be used as an evidence of the Ottoman state intention to destroy Armenians and Stanley agrees to this.

The British released Ottoman POWs and bureaucrats accused of carrying out crimes against humanity from Malta due to lack of evidence in 1921. Although the British High Command in the capital city of the Ottoman Empire, Istanbul, as victors and occupiers had access to every document in government archives, they failed to find one single document that could be used against those in Malta.

We do not deny the suffering of all parties involved. We say both parties suffered and Ottoman courts in fact punished dozens of its own officers to death for misconduct during deportations. However, labeling those events as ‘genocide’ is legally wrong and misleading.

Stanley accuses those who challenge Armenian narrative and his own convictions almost as being morally inferior. He writes in his Prologue: ‘We will not be drawn into the unnecessary argument over whether the Armenian genocide happened. That debate is over.’ (P5)

This attitude against debate is preventing efforts to reconcile. He continues in the Epilogue: ‘because the two sides cannot be both right…’ and attempts to build a dichotomy. ‘You are either with us or not’ style rhetoric is not the way to find the truth. We call the events of 1915, a botched deportation during a time of chaos. They call it “genocide”. The intention behind this necessary operation aiming at improving national security was not ethnic cleansing, a fact that had been proven over and over again.

Vicken Babkenian’s credibility, even as an amateur historian, is also questionable. His lack of discipline as an academic is evident in his style of presenting events. Even in his first pages, he proves his weak research skills or intention to manipulate numbers. Babkenian writes: ‘…Armenian migration that today has culminated in an Armenian_Australian community of over 50,000 people…’

According to a study of latest census in 2011 released by Department of Immigration and Border Protection, there are 16,723 people define themselves as Armenian by heritage or ancestry. Armenians in Australia, use this ‘50,000’ number very often, like the 1.5-million, the number they use to quantify victims of the events of 1915 to back their claims. Turkey and ‘genocide denier’ historians challenge this figure as well. After all Vicken Babkenian presents himself as a researcher at the Australian Institute for Holocaust and Genocide Studies, an organization which is registered to an address Morayfield, Queensland.

Babkenian , from time to time contradicts, discredits his own sources. He outlines the details of the War Precautions Act and writes about government led censorship and propaganda through newspaper articles during war years. ‘…the state capitals’ daily newspapers were conscious of their patriotic and imperial mission.’ (P102) Yet the same chapter has 21 references, 11 of which are those same newspapers and articles published in those newspapers.

We could go on more and more about the factual mistakes, missing context and racist narrative in the book, but authors also pre-emptively close any prospects of a debate, so we will leave it here.

Armenia, Australia and the Great War is a book that aims to force you to pick a side on a foreign and contentious debate by using the Anzacs. It serves to no constructive purpose that would help both communities to reconcile and work together for a better Australia.

Genocide studies and academic debate are crucial for humanity to not to witness similar tragedies of the past again. International systems have been established to prevent civilians to be targeted by state apparatus or armed groups. Terms such as “ethnic” or “religious cleansing” should no longer be needed to define events we witness in the news. Unfortunately, all our attempts have failed so far to prevent crimes against humanity from happening again. Even after Rwanda, Serbia and Sudan; crimes against humanity are still being committed in large scales in Iraq, Syria and Somalia.

So, we have to ask the hard question to ourselves. Is it the ‘denial’ of labeling events of 1915 as genocide or other parties’ including Armenian’s self-claim of no responsibility to blame for such events to continue to happen today? How much the biased reading of history prevents us to understand the real causes of great tragedies? How much responsibility the super powers of the world bear in supporting ethnic and religious groups with arms and no action in supra-national institutions?

After all, without an open and honest debate, how can we find ways to stop tragedies as such to ever happen again?

Would real friends insult, intimidate or belittle you, when you ask questions? 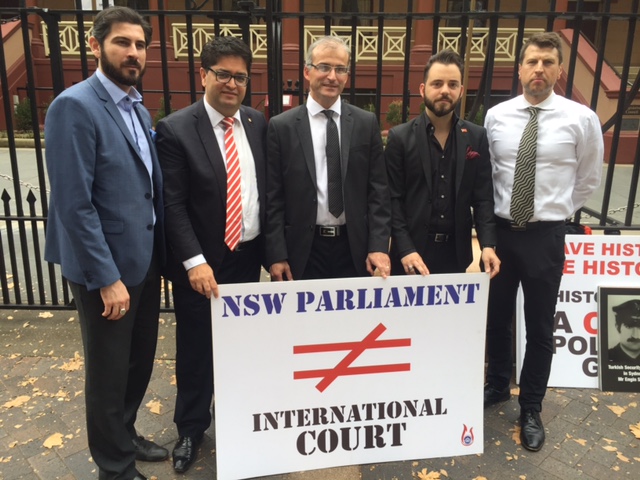 Representatives from Australian Turkish Advocacy Alliance have laid flowers to the New South Wales parliament on the third anniversary of a motion that unfairly vilified the ancestors of Australian-Turkish community.

On May 8, 2013, the NSW Parliament lower house passed a motion recognizing the claims of Armenians, Greeks and Assyrians against the Turkish people. Both, then the premier Barry O’Farrell and the leader of the opposition John Robertson refused to hear our side of the story while advocating this divisive motion in their groups.

”They betrayed the people of NSW by doing so,” said ATA-A’s Director Hakan Evecek in a brief statement.

”Taking sides in an international historic debate is not in the job description of local parliamentarians,” added Evecek, ”They should have used the time and effort on tax payers’ expense to work on delivering better services to all of us,”.

The motion that was passed in both houses of the NSW parliament triggered a very strong reaction from Australian-Turkish community.

It gave birth to the Australian Turkish Advocacy Alliance and united dozens of organizations and tens of thousands of Australians with Turkish descent to fight for one cause.

That cause is advocating multi-cultural harmony and unity in Australia.

Since then, we continue to remind our politicians that:

Australian Turkish people will not forget this motion which was passed to appease minority groups such as Armenians, Greeks and Assyrians.

But as we have done so since 1915, we will channel the strong reaction it created to avenues towards peace and harmony.

‘Peace at home, Peace in the World.’ 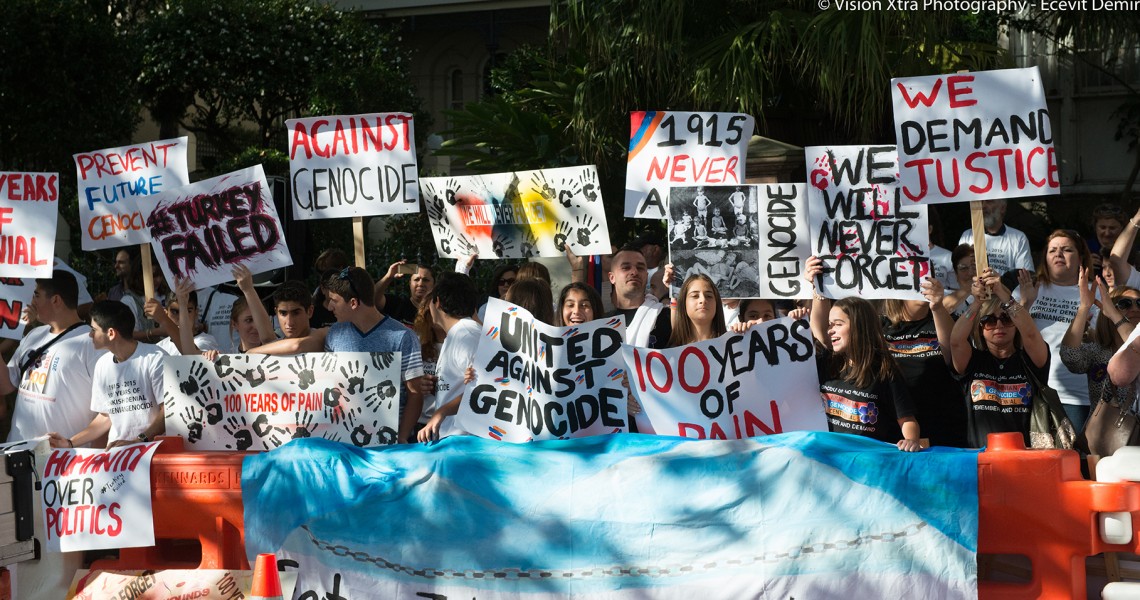 Local politicians must stay out of international historical debates.

Armenian hatred against different opinions is a threat to Australia’s multicultural harmony.

Australian Turkish community ready for respectful debate, open dialogue with Armenians about the events of 1915.

This weekend, Armenians living in Australia will use all their influence and resources to convince Australians that Ottoman Empire carried out genocide against them.

They will try to silence any other voice than theirs.

In 2013 As European court of Human Rights stated that ‘genocide’ was a precisely defined legal concept and needed to be proven according to legal procedures. The court said it doubted that there could be a general consensus over the case of Armenians.

There has been no decision in any of the international tribunals and courts in that regard despite Armenian Diaspora’s relentless efforts for almost a century.

Historians also fail to reach a consensus on the matter. Scholars continue to discuss whether or not there was ‘an intent to destroy’ Armenians in Ottoman orders which aimed at ending Armenian revolts and collaboration with the enemy by deporting them to southern states of the empire.

Despite ongoing historical debate and no legal basis for labeling events as genocide, Armenians continue to accuse anyone inquiring these facts for being a genocide denier.

‘They abuse and insult Australians with Turkish descent for voicing their side of the story,’ Australian Turkish Advocacy Alliance (ATA-A) Director Hakan Evecek said.

Armenian hatred against Australian Turks voicing their opinion on the events of 1915, a threat to Australia’s harmony

We will not forget terrorist atrocities carried out by the Armenian terror groups against innocent Turks across the world, in the name of revenge.

In 1980, Armenian terrorists murdered Turkish consul general along with his bodyguard in Sydney.

‘These events continue to remind us what generations raised with hatred and ignorance are capable of,’ Evecek added.

The multicultural harmony of Australia is paramount to all Australians, including to us with Turkish descent.

We respect and appreciate the fair go Australia has given to us. Therefore, we are ready for dialogue on this issue through respectful debate.

We have already showed our readiness for open dialogue last year by accepting an invitation from the Goethe institute to take part in a panel to discuss the issue.

Unfortunately, the panel had to be called off after, according to ABC, Armenian participants refused to be on the same stage with Turkish Australians.

Local politicians must stay out of international historical debates

Some politicians continue to use the grievances of minority communities, including those of Armenians in Australia, to their benefit.

Lobby groups who only advocate division in our society support their unsubstantiated ethnic hatred towards us.

This has to come to an end.

We call politicians not to enter historical debates. History should be studied through its disciplines by its scholars at academic level.

We call politicians to avoid using divisive, often offending rhetoric on the sacred floors of our democracy.

We invite Armenians for open debate on the issue. We seek harmony through dialogue.

We call Armenians to stop bullying and intimidating Turkish-Australians with their insults, ignorance.