by Secretary in Blog Posts, Op-Eds

Even their biggest supporters are now denying the Armenian Lobby’s extreme views and distortions of the facts.

We have replied to Prof Stanley’s ‪#‎TheWaterDiviner‬ review with this release : ” Grab a coke and some popcorn and enjoy the movie” , this movie was not meant to be a documentary.

But –render unto Caesar the things that are Caesar’s– he was right on one thing : “Armenian experience had no place in this movie because it was simply irrelevant.” 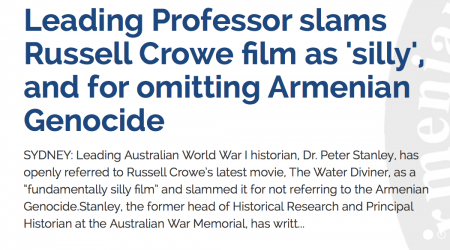 But the political bureau of the Armenian Revolutionary Federation, falsely advertised this review as ‘Leading Professor slams #TheWaterDiviner for “omitting” the events of 1915!’ This was no more than a joke, when Prof Stanley himself said in a comment in the page that “he is not criticising the movie for its omissions” .
The Armenian lobby kept the post online, until Peter Stanley had to publicly “refute” their incorrect claims via twitter. Peter Stanley is known for his support for the Armenian Lobby’s unfounded claims. And yet even he had to refute the Armenian lobby’s distortion of the facts at one point.

Turkey – Azarbaijan and Australia are on NYT’s List of Places to go in 2015!

This is What NYT writes about Kas :

Kos is out. Kas is in. Economic cataclysm in Greece aside, prices remain high on the Greek islands, which increasingly have less to offer the all-inclusive-resort-averse tourist. Enter the Mediterranean coast of Turkey, and its gem, Kas. While the nearby town of Kalkan has fallen victim to hordes of hard-partying Brits (many a Kalkan restaurant now serves “Full English” brekkies), the old fishing village of Kas remains relatively untouched. Known largely as a divers’ paradise, the city has a hippyish sensibility, partly owing to a number of jazz-playing waterfront watering holes. Visitors interested in the past can use Kas as a base for visits to the nearby Lycian cities of Patara and Xanthos.

END_OF_DOCUMENT_TOKEN_TO_BE_REPLACED

Armenian Church in Dispute and 2015 Encyclical

On February 2014, I had written a report about the Armenian Apostolic Church.[i] The report contained some general information about the history and the structure of national church of the Armenian people. The report also explained the then recent dispute within the Church. At the center of the dispute was the alleged character and misconduct of Catholicos of Etchmiadzin Karekin II, the spiritual leader of all Orthodox Armenians. Diasporan Armenians, especially those raised with the Western values that emphasize democratic and transparent governance, were especially vocal about their criticism of the Catholicos. Karekin II and his supporters replied by stressing that such criticisms were part of a smear campaign directed at Karekin II, and that the content of the calls for better governance made by the diasporan Armenians were simply incompatible with the traditional values espoused by the Church.

END_OF_DOCUMENT_TOKEN_TO_BE_REPLACED

by Secretary in Blog Posts, Op-Eds

Hrant Dink, was a Turkish-Armenian journalist. He worked as the editor-in-chief of the bilingual Turkish-Armenian newspaper Agos. He was extremely critical of both the Turkish Republic’s position on the alleged Armenian Genocide, and of the Armenian diaspora’s campaign for its international recognition. Hrant Dink was murdered in Istanbul in January 19th, 2007. The murderer, Ogün Samast, a 17-year old Turkish nationalist was arrested.

Investigations into why he was killed took place and it is believed that Samast was paid to assassinate Hrant Dink. After his death thousands of Turkish mourners marched the streets with slogans and signs saying “We are all Armenians” and “We are all Hrant Dink”.