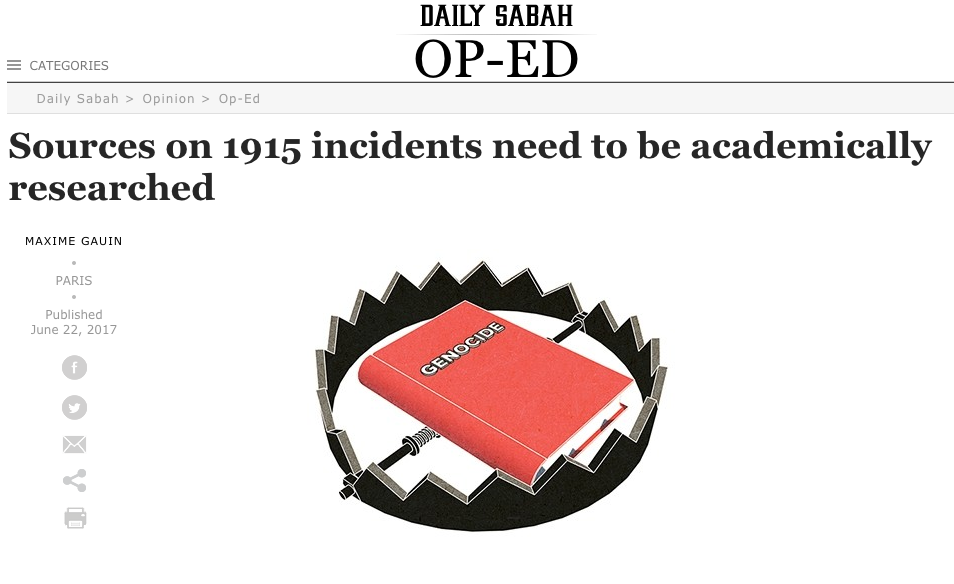 The Evidence Problem In Genocide Claims

Absence of evidence is not the evidence of absence…

Famously uttered by then the U.S. Secretary of Defense Donald Rumsfeld in order to convince the world existence of the non-existing WMD’s in Iraq ahead of the 2003 War, the statement above went down to history as one of the biggest propagations of a lie that resulted in the deaths of millions.

Those who are familiar with the debate about the characterization of events of 1915 under Ottoman rule,  know so well that the evidence to prove intent within Ottoman ranks to exterminate minorities – which is required by international law to qualify the tragedy as genocide – does not exist.

The history of academic work on this topic unfortunately marred many times by fabricated or falsified evidence.

Extrapolation, a method recurrently used in the mainstream publications supporting the Armenian claims has also become a big problem in establishing the truth that would allow both peoples to begin reconciliation after more than 102 years.

Academic Maxim Gauin in his latest article explains one of the latest incidents of extrapolation by Taner Akcam, a very famous advocate of the genocide camp.

You can read it from this link. 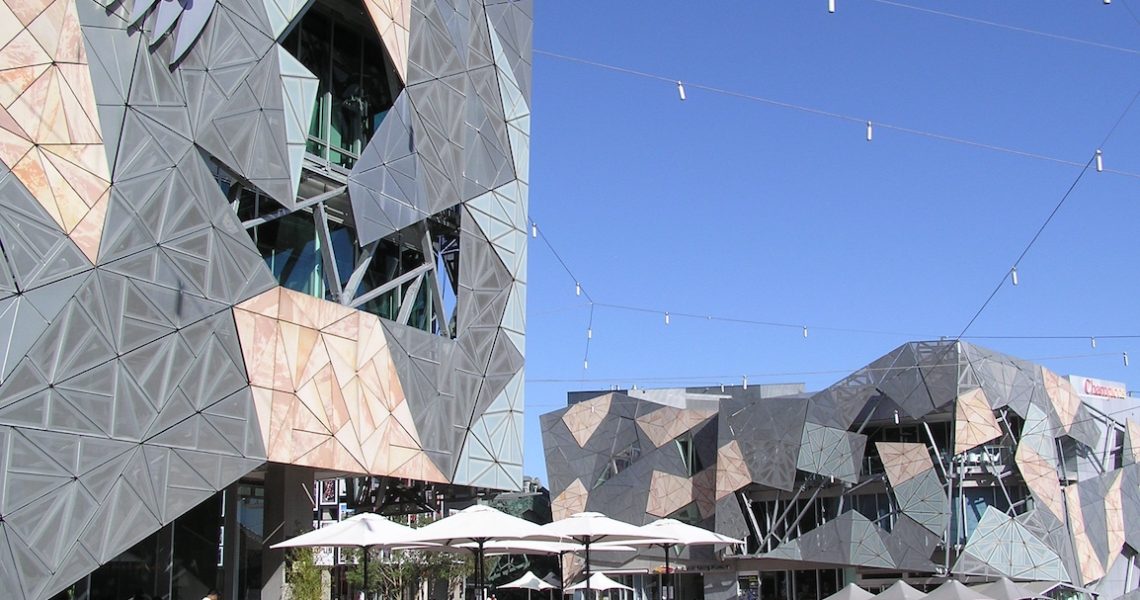 As much as the lobbying efforts of Asian superpowers in Australia, such as the one recently reported by ABC, Australians should also be worried about the increased pressure by some Armenian diaspora lobby groups and their proxy associations on our public broadcasters.

These lobby groups, advocating for the foreign policy agenda of the Republic of Armenia has recently launched an unprecedented attack on the editorial policy of the SBS. The groups are pressuring SBS to rewrite its 45-years old editorial guideline to suit their agendas in regards to the characterisation of the events of 1915.

No major global news outlet uses the word genocide in describing the tragedy suffered by the Ottoman Armenians in early 1900s.

Reuters, Associated Press and BBC are among those respected global media outlets, who have similar policies to the SBS’ in describing the events of 1915.

There are both legal and historical reasons for major news organisations not charectrising the events of 1915 as genocide. One should study journalism to understand the logic and reasons behind such editorial policy.

A significant number of research papers, documents and articles are also available in open sources for the one who is genuinely interested in finding the truth.

The latest attack on SBS, which finds a disproportionately wide coverage on News Corp outlets, is a blatant attempt to change history through lobbying and make it fit into current foreign policy objectives of a nation afar.

We have been witnessing similar pressure being put on media organisations worldwide by politicians like Donald Trump and Vladimir Putin.

The strength of our democracy comes in part from press freedom that is free from political and lobbyists’ interference.

Australian Turkish Advocacy Alliance (ATAA) recently wrote to Senator Honorable Scott Ludlam, who used the rhetoric of some Armenian diaspora lobby groups’ to attack the head of SBS Michael Ebeid, about the potential dangers of his flawed logic in interfering with the editorial integrity of the public broadcaster.

“This could be seen as an example of a worldwide trend by elected representatives attempting to manipulate public opinion through pressuring independent mainstream media outlets,” wrote ATAA associate Unal Yildiz in his letter.

“It could also be perceived as a continuum of past government pressure on our public broadcasters for their reporting based on facts,” he continued in that letter to the Greens senator.

The media can only remain as the 4th Estate as long as there is the ability to report free from bias, political interference. The attack on media’s integrity from both ends of the political spectrum by politicians with little knowledge of the methodologies of history or the ethics of journalism is the biggest threat to our democracy and our stance as one of the greatest multi-cultural nations on earth.

We believe politicians and lobby groups should not be involved in trying to impose a certain bias on the reporting of the SBS.

Australiasian Muslim Times, a not-for-profit community publication, has featured the Turkish community iftar, which was held in the NSW Parliament House on June 8. AMUST, in its feature story, also published the edited version of a speech delivered by the Chair of Turkish Islamic Associations Federation, Dr Abdurrahman Asaroglu. We commend Asaroglu for his speech, which highlighted the tolerance and respect in the Turkish culture. Here is an excerpt from Dr Asaroglu’s speech:

We grew up with the melody of “we are many but we are one.” Yes we are one nation called Australia. Our heritage is our strength in cultural values that we share and cherish.

Multiculturalism was known to Anatolian multiethnic communities, where Churches, synagogues, diverse languages, folk music, and varying ways of life were practiced for centuries side by side in Turkey.

I remember, my grandfather once told me that his Usta (Supervisor in trade, who was from a Christian belief) used to remind him by saying “Son did you read your Quran today, I read my bible.”

My grandmother used to ask me to take a plate of her delicious food to our Armenian neighbour. It wasn’t until later years, I learnt that she was practicing the sayings of the prophet Mohammad (s), “we are not true believers unless we love for our neighbour what we love for ourselves”.

For the full story please go to the following link.

Both Federal and State MPs, as well as the NSW Minister for Multiculturalism Ray Williams and NSW Minister for the Veteran Affairs David Elliott attended the Iftar and gave important speeches. Representing the NSW Leader of the Opposition Luke Foley, Paul Lynch, Member for Liverpool; Federal MP for ALP, Member for Fowler, Chris Hayes; Chair of the Friends of Turkey of the Parliament of New South Wales, Trevor Khan and Member for Granville, Julia Finn did join the NSW Turkish community for the occasion.

Turkish Ambassador to Australia Vakur Gokdenizler and Consul General of Turkey in Sydney, Melih Karalar were also present at the event, which was attended by consular officers of various nations.

The Iftar had provided an inclusive and open platform for the New South Wales Turkish community, who is getting ready to mark the 50th anniversary of the arrival of the first plane of Turkish migrants to Australian in 1968.

The Governor General of the New South Wales, His Excellency General The Honourable David Hurley AC DSC (Ret’d)  sent a message to the night, congratulating the community. 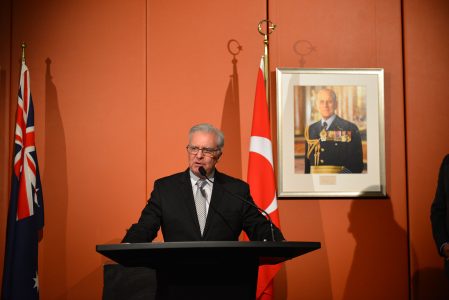 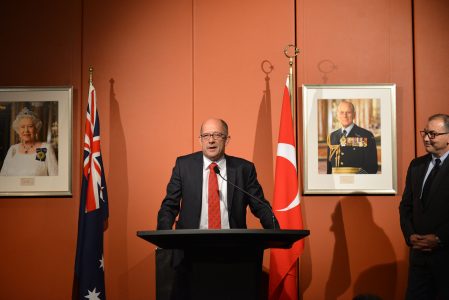 Chair of Friends of Turkey of the Parliament of NSW, Trevor Khan 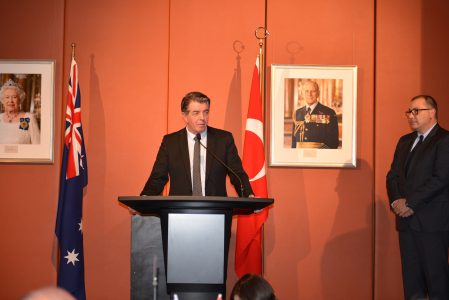 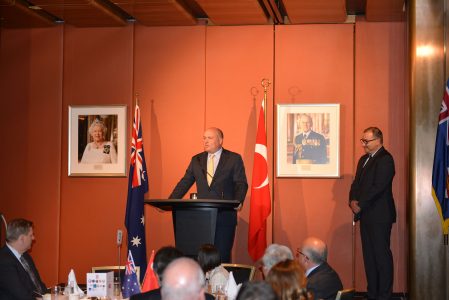