JCAG – Bringing Terrorism Down Under 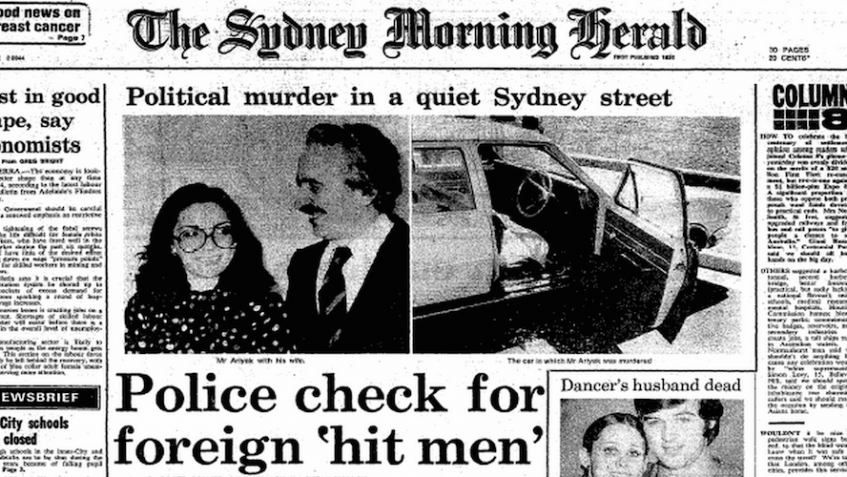 Dec 17 marks the 33rd anniversary of the assassination of the Consul-General of Turkey and his bodyguard, by terrorist member of the “Justice Commandos of the Armenian Genocide”. They were never caught, and although a number of attempted imports of high-powered weapons by extremist members of the Australian-Armenian community were intercepted over the following years, the AFP and other agencies could not prevent the bombing of the Turkish Consulate in 1986.


Although the Hilton bombing has become part of Australian folklore and lives on in infamy, these serious terrorist attacks are almost unknown. One has to wonder why such an outrage is not more widely remembered. Part of the reason, we believe, is the strong Armenian lobby, and its attempts to portray the actions as somehow “just”. The assassinations were of course devastating for the families, the tentatively sympathetic (to the terrorists) response of parts of the Australian community was demoralising for Australian-Turks.

Recently, the current Sydney Consul-General managed to convince the local council to erect a small plaque in memory of the slain, this was 30 years after the event, on a Sydney street. every year there is a small gathering of members of the Turkish community to remember the dead.

We, members of the Australian-Turkish community believe that one of the reasons the debate between Turks and Armenians over the events in Eastern Anatolia 1915-1919 is the extent to which the extreme hardliners have control over the Diaspora community groups. In the past decade, every indication, however small, of rapprochement, between Armenia and the Turkey, has been met with condemnation by the Armenian Diaspora – who demand absolutely no compromise, nor any attempt to soften demands for recognition, wholly, of their version of these historical events, and consequently, compensation by way of taking Eastern Anatolia and making it Western Armenia.

What worries us in Australia is the extent to which some of our own politicians have jumped on this bandwagon. Mr Jaka MLA has addressed numerous Armenian gatherings to express his support for the struggle for “Western Armenia”. A parliamentary delegation travelled to Armenia and Nagorno-Karabakh, to offer support, and then official recognition by NSW Parliament (by unanimous resolution) to this enclave, carved out of Azerbaijan by an Armenian military operation, including the genocide of Azeris in 1993. This new formed republic is not recognised by any nation belonging to the UN family. Apart from NSW, there are three other states, Abkhazia, South Ossetia, and Transnitria. Once again, one has to wonder why our parliamentarians consider this issue to be so important as to not only fly delegations over there to provide moral support, but join this illustrious family of “states” that have recognised this illegal occupation of foreign territory.The UN steadfastly refuses to legitimise this land grab.

As we approach the 100 year anniversary of ANZAC day, we are aware that the Armenian lobby has ramped up its lobbying. The aim is obviously to “crash the party”. We do not shy away from debate, but the general public has a right to know exactly how extremist this lobby is. Indeed, their offices are adorned with posters such as those lionising the “Lisbon 5” – terrorist members of “the Armenian Secret Army for the Liberation of Armenia” who raided the Turkish Ambassador to Portugal’s home, took his wife and only child hostage, and then wired the place with explosives. During the subsequent seige, they detonated the explosives, killing themselves (probably accidentally) and the ambassador’s wife, his son escaped under a hail of bullets.

There are many other examples, such as Monte Melkonian, convicted and gaoled terrorist, and leader of the Armenian irregulars who unashamedly undertook the “ethnic cleansing” of Karabakh of over 600,000 Armenians. Another hero to the Armenian National Congress.

Organised acts of terrorism such as these are routinely celebrated as the acts of heroes by the Australian-Armenian lobby. That is a matter for their conscience, what concerns us, and we think might be worthy of inclusion in an article in your paper, are the Australian politicians who attend such celebrations of terrorist acts.Joe Hockey, of course, but there are others. For example we have a recent photo of Fred Nile MLC attending a commemorative dinner for the Lisbon 5 in Sydney. Unsurprisingly, he is one of the main sponsors of recent resolutions to “recognise” the Armenian genocide, and the Nagorno-Karabakh occupation. We believe his support is based on a wider belief of a worldwide struggle between Christianity and Islam.

Terrorism is not praiseworth just because one happens to agree with the views of the terrorist. That kind of moral equivalence would be abhorent if applied to excuse, say, the Bali bombings, or the attack on the unarmed returned soldier on a London street. We feel that our politicians ought to take a more morally defensible stand, and not look for cheap votes. In addition to being the right thing to do, it may well also force a softening of the hard line taken by the Armenian diaspora. That would allow some freedom for the Armenian government to properly seek a mutually respectful peace with its neighbour, Turkey, a normalisation of relations, and one hopes, an end to the sterile and ultimately useless debates about “genocide” – was it or wasn’t it.

So many died, in such tragic circumstances, the ongoing tragedy is that their suffering is now used as a political football.