Last week Australian Turkish Advocacy Alliance (“ATA-A”) engaged in its first ever “advocacy week” in Canberra. During the Advocacy Week, ATA-A has also held a “Friends of Turkey Reception” to where almost 20 MPs and Senators attended including the members of the Australia Turkey Inter Parliamentary Friendship Group. The hosts of the reception were the chair and the vice chair of the Parliamentary Friendship Group Mr Craig Laundy , Member for Reid and Mr Rob Mitchell, member for McEwen.

The New South Wales MLC Rev Fred Nile, otherwise known as the father of the divisive and racist “genocide motions” NSW Parliament has passed in 2013 attacked the host MPs by another bigoted Facebook post. The poorly photoshoped image titled “Armenian/Seyfo Genocide deniers should not be hosted by our politicians” shows Craig Laundy MP, Member for Reid and Rob Mitchell MP, Member for McEwen with a Turkish Flag background and the poster shows Fred Nile writing “Thinks he’s a historian, is just really a racist bigot”. 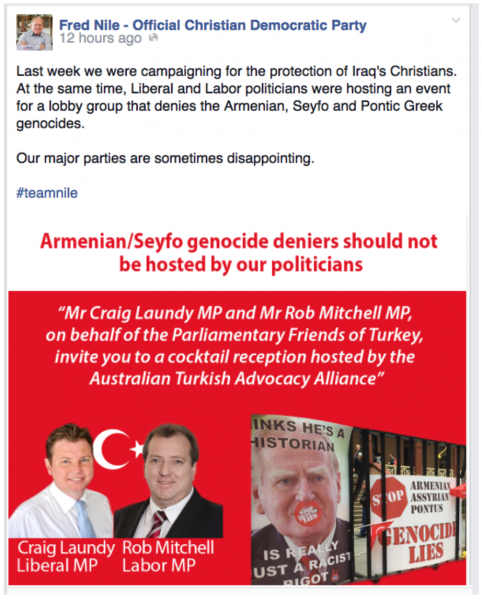 The post, which is a text book example of dog-whistle politics stirred a flow of racist comments from Fred Nile supporters. Some of the comments on the Facebook post include :

ATA-A has long advocated that the parliaments are not the places to legislate what happened in the history. When there is no consesus on an historical event, the issue should be left to the historians to decide. And there is a number of reputable genocide scholars, including holocaust survivors Prof Guenter Lewy and Prof Heath Lowry who say that tragic as they are, the events of 1915 do not constitute a genocide.