Since the publication of the Foreign Minsiter’s letter , the Armenian Lobby has become increasingly shrill in its criticism, and protest over the Australian government’s position on the events of 1915.

The simple fact is that the Australian government does not recognise the events of 1915 as amounting to a genocide. This, of course, sent the Armenian Lobby into a complete meltdown. They have, since June 2014, gone into a lobbying overdrive in order to try to get the government to change its position. Not being able, on this occasion, to put pressure on politicians to force them to do what they wanted, the Armenain lobby group is forced to adopt new tactics.

This time they made an FOI application , and received numerous documents which showed absolutely no conspiracy. Indeed, in every one of these internal documents, intended for internal/classified communication, no-one “recognises” these events as a genocide. Clearly, having conducted its own review, various Australian govenrments have come to the same conclusion – as terrible as the events of this period were, they did not amount to genocide.

This will never be enough for the Armenian Lobby, who demand everyone adopt their own simplistic and one sided interpretation of the events. This time, being unable to lobby, convince cajole or otherwise pressure politicians to come around, they resort to the conspiracy theory. Without a shred of evidence, it seems the ANC is now accusing the Australian Government of becoming Turkey’s mouthpiece on this topic. We suppose some people will believe anything.

The claims are preposterous, but the Armenian Lobby is desperate. A very clear and important crack has formed in their political program of trying to embarrass Turkey. They will stop at nothing, even stopping as low as to insult the Government of Australia, if they refuse to tow the ANC party line. 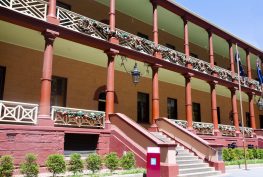