Not a genocide: Visiting professor’s views on Turkey and its historic role anger Australia’s Armenians 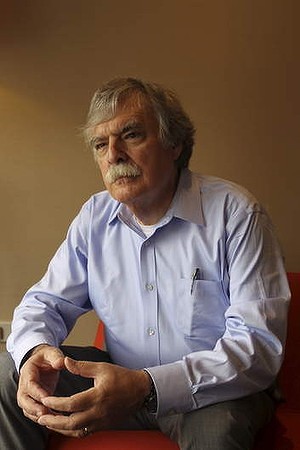 Visiting US academic Justin McCarthy paints himself as an unassuming historian just doing his job.
But his presence in Australia on a brief speaking tour has enraged the Armenian community and landed him in the middle of a row between the NSW Parliament and leading politicians in Turkey.

He has had the doors of the Art Gallery slammed in his face and the welcome mat pulled from beneath his feet by the University of Melbourne.

He has been compared with holocaust denier David Irving (a charge that he says ”offends and saddens” him) and has been portrayed as a tool of the Turkish government.

The source of this odium is the implosion of the Ottoman Empire a century ago, and whether the deaths and expulsion of more than a million Armenians during that bloody chapter of history amounted to a genocide at the hands of the Turks.

The hugely influential Armenian diaspora (with politicians such as Joe Hockey and Malcolm Turnbull on its side) says yes. The Turks say no.

Professor McCarthy leans towards the Turkish side, arguing events at that time were more akin to a civil war with mass casualties on both sides.

”This was a horribly inhuman time for all groups involved,” the 68-year old said in Sydney on Friday. ”To say that one group was guilty and one was innocent is just to ignore the historical reality, I believe.”
Armenian National Committee of Australia executive director Vache Kahramanian says Professor McCarthy’s ”denialist” views are an ”insult” to Armenians. He also accuses Turkey of using the looming centenary of Gallipoli to ”politically blackmail” Australian politicians.

In May the NSW Parliament endorsed the prevalent view of an Armenian genocide, drawing threats from Turkey’s parliamentary Speaker, Cemil Cikek, to bar NSW MPs from the Gallipoli centenary ceremony.

Professor McCarthy said he ”could not be more against” threats of retaliation. But he also believes his opponents should debate him, not close the discussion down. ”Even Jesus listened to the devil,” he said.
The organiser and funder of the speaking tour, the Australian Turkish Advocacy Alliance, booked Professor McCarthy nearly two months ago to speak at the University of Melbourne and at the Art Gallery of NSW but both institutions cancelled at the last minute.

The gallery said on Friday that it had canned the ”private function … in the interest of public and staff safety”. The university said ”the description of the event given at the time of the booking was not consistent with its true nature”.

On Thursday, Professor McCarthy addressed a small gathering in Parliament House in Canberra, organised through the office of federal MP Laurie Ferguson, but only five MPs turned up. He appeared unfazed, saying: ”I just write the history. It should be studied like any other set of events.”