Syrian Armenians from Kessab continue to flee to Turkey 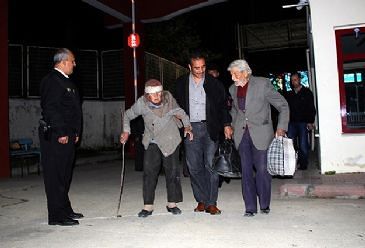 The Syrian Armenians living in Kessab had reportedly asked the Western-backed FSA fighters to help them cross over into Turkey. After the rebels escorted them to the border crossing and some necessary paperwork was done, the Kessab Armenians were brought to a teachers’ lodge in Yayladağı. Yayladağı District Governor Turan Yılmaz is reported to have been personally involved in meeting the Syrian Armenians’ needs.

The clashes around Kessab have been ongoing for more than 10 days according to Turkish media. The Syrian Armenians decided to flee the fighting between rebels and forces loyal to the Syrian regime near Kessab.

Two Armenian sisters from Kessab, Satenik (82) and Surpuhi (80) Titizyan also arrived in Yayladağı last week after being escorted by Syrian rebels to the Turkish-Syrian border.

Most of the Armenian residents of Kessab fled after the clashes began. Fighters from an array of rebel groups, including the al-Qaeda-linked al-Nusra Front — designated as a terrorist group by the US — then seized control of the town on March 16. After rebels seized the Kessab crossing point, the fighting continued in other towns that are not on the border with Turkey, mainly in Latakia province.

Foreign Minister Ahmet Davutoğlu said Turkey’s doors are “wide open” to the largely Armenian residents of Kessab. His remarks came after the Syrian government, as well as several Armenian websites, had claimed the rebels entered Syria from Turkey. In a strongly worded statement released on March 24, the Armenian National Committee of America (ANCA) quoted its chairman, Ken Hachikian, as saying, “The attacks on the predominantly Armenian-populated village of Kessab over the weekend represent an attack on all Armenians.” ANCA asked the US Congress and the White House to put pressure on Turkey to end its alleged support for Syrian rebels.

The Turkish Foreign Ministry said on March 26 that the claims of alleged Turkish support for Syrian opposition forces in Kessab by allowing them to use Turkish territory or in any other manner were “entirely baseless.”