In the early 1930s Adolf Hitler came to power in Germany. After Hitler came into power and another world war was becoming imminent , the newly formed Soviet Armenian state cut a deal with the Nazis.

The 812th Armenian Legion and Armenian battalion were organised. It would grow to become twenty thousand soldiers strong. This battalion fought with the Germans in the Crimea, the North Caucasus, and Holland.

The soldiers of the battalion were assigned a special duty in keeping with Armenian past military skills. Many Armenian soldiers were used as police units in newly captured and occupied lands. The soldiers were assigned to spy out and capture all Jews and other undesirable elements as listed by the Germans. Once a sizeable number of individuals were captured, the Armenians herded them together and marched them to the concentration camps that became so infamous for the mass massacre of millions of Jews.

By August 1935, Armenian newspapers were publishing pro-German articles. The Armenian press could not praise Hitler enough. The following are just a few of the many examples of the Armenian press slobbering all over Hitler and the Nazis. 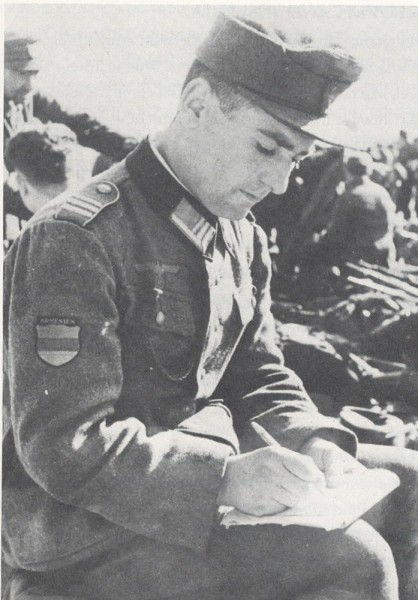 Armenian support for Nazi Germany was widespread. Armenians living in Germany and France joined the 58th Panzer Corps and the Ostlegion of the Wehrmacht’s 10th Army in large numbers.

Armenian Revolutionary Federation leaders worked closely with German Military Intelligence. The Armenians did for Germany what they first did best for the Russians in World War I — spying. From mid 1941 until September 1944 the Armenians worked closely with Nazi intelligence offices in Turkey and throughout the Middle East. Armenian “secret” agents worked to spread German propaganda and helped the Nazis run down and locate Jews.

During the early years of the war Armenian leaders thought Germany would win the war. They made every effort to cut a deal for the Germans to give them Russian and Turkish lands.

Once the tide of battle of World War II changed and began to flow toward an Allies victory; the Armenian chameleons jumped the German ship and swam like drowning rats. They began to denounce the Germans, then groveled before the Allies just as they had done before the Germans. These were the same Allies who just a few years before which the Armenians claimed owed them Russian and Turkish lands.

Countless Armenians were in collusion with the Nazis and Hitler. They helped in the extermination of Jews during World War II. These Armenians were important in their actions and were very valuable to the Nazi war efforts in creating what became known in 1948 as the “Holocaust.”

There can be no question about the massive Armenian support for Nazi Germany during World War II. What is incredible is that once the Armenians saw that Germany was going to lose the war, they switched sides.

After the war, the Armenians claimed that Hitler made statements about them being massacred in 1915. This is a false claim and fake evidence was submitted that has been exposed as being a forgery.

The Armenians, for ten years from the early 1930s until 1944, actively supported Hitler and the Nazis. After the war the Armenians attempt to “claim” Hitler was against them. But there is more much more that Armenians have yet to answer for regarding their active cooperation with Hitler and the Nazis. Rutgers University’s Journal of Law and Religion is in the process of using the Internet to post newly discovered Nuremberg Nazi war crimes trial evidence. These published documents pose both questions and answers about Armenian involvement and support of Adolph Hitler, the Nazis, and Germany before and during World War II.

The above has been excerpted from Chapter Twenty (“Armenians Join Hitlers Nazi Cause: Ten Years to Help Nazis Attempt to Conquer the World”) of Sam Weems’ “Armenia: Secrets of a ‘Christian’ Terrorist State,” outlining Nazi-Armenian collaboration. (Pages 346-351.)