For over two decades, almost 20% of Azerbaijan’s internationally recognised territory, including the region of Nagorno Karabakh and seven adjacent districts, has been under an illegal occupation by neighbouring Armenia and nearly one million Azerbaijani civilians have been displaced as a result of the Armenian policy of thorough ethnic cleansing. While Armenia continues to reject the numerous international legal documents calling for withdrawal of its troops from the Azerbaijani lands, Azerbaijan has been engaged in the internationally-mediated talks in order to reach a peaceful end to the Armenian aggression in accordance with the fundamentals of international law. 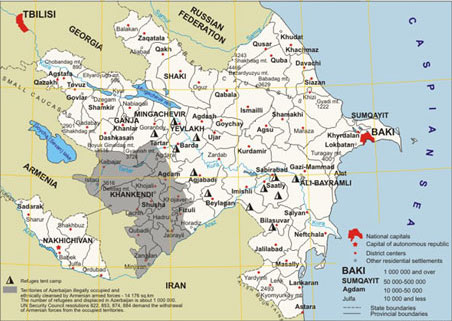 At the core of the conflict are divergent fundamental world-views. For Azerbaijan, a nation is built on inclusive civic identity, which makes no distinction among citizens based on ethnicity or religion. Moreover, the Republic of Azerbaijan sees Azerbaijani co-ethnics in neighbouring states as citizens of those states and contributors to building friendly relations with neighbours.

For Armenia, the ethnicity- driven identity defines its politics, making the country predictably most mono-ethnic state in Eurasia. Simply put, the vision is that country itself is for Armenians and presence of an Armenian community beyond Armenia’s borders provides an opportunity for territorial claims. The two contrasting results of these divergent visions are successful regional integration championed by Azerbaijan and Armenia’s continued underdevelopment and self-isolation. Unfortunately, the anachronistic, past-oriented vision espoused by Armenian politicians undermines the future of the entire region, including Armenia itself.

Various international organisations have expressed concern with the humanitarian consequences of the conflict and called on Armenia to comply with the norms of international law. Both the United Nations General Assembly and the Security Council, the European Parliament, the Organisation for Security and Cooperation in Europe (OSCE), the Organisation of Islamic Conference, the Council of Europe, other international groups and individual governments have repeatedly issued statements calling for the withdrawal of Armenian troops. In fact, all members of the international community, with the sole exception of Armenia, recognise the territorial integrity of Azerbaijan. Ironically, even Armenia itself, while purporting to promote the “independence” of the ethnic separatist regime on Azerbaijan’s occupied territories, has refused to recognise it and instead has tried to legitimise a territorial expansion by claiming the region as part of Armenia.

The four United Nations Security Council Resolutions 822, 853, 874 and 884 reflected the international community’s alarm at the threat to regional peace and security posed by Armenian military adventurism. Later, the United Nations adopted a number of resolutions on the situation on the occupied territories of Azerbaijan, the latest one in 2008 .

“The actions taken by the government of Armenia in the context of the conflict over Nagorno-Karabakh are inconsistent with the territorial integrity and national sovereignty principles of the Helsinki Final Act. Armenia supports Nagorno-Karabakh separatists in Azerbaijan both militarily and financially. Nagorno- Karabakh forces, assisted by units of the Armenian armed forces, currently occupy the Nagorno- Karabakh region and surrounding areas in Azerbaijan. This violation and the restoration of peace between Armenia and Azerbaijan have been taken up by the OSCE.”

The United States, France and Russia co-chair the OSCE Minsk Group, which has been engaged in mediating between Armenia and Azerbaijan since 1992. Currently, the mediators have offered the parties the so-called “updated Madrid Principles” , which Azerbaijan has accepted in principle, while Armenia has not been able to formulate a clear response for over a year. As a result, of Armenia’s unwillingness to be a part of the search for a peaceful solution, the situation along the line of contact remains tense and fragile in spite of the cease-fire, which has been agreed in 1994. Even though Russia took an active part in brokering the cease-fire and is now actively engaged in talks between Armenia and Azerbaijan, it was the military assistance from Russia, including $1 billion in illegal arms transfers, which significantly contributed to Armenian military expansion in the early 1990s. Today, with the Russian military bases on its territory and Russian border guards protecting its borders, Armenia’s self-imposed dependence on external powers has become a visible and sad outcome of its short-sighted policy of aggression towards neighbouring states.