A bad day in the Bundestag 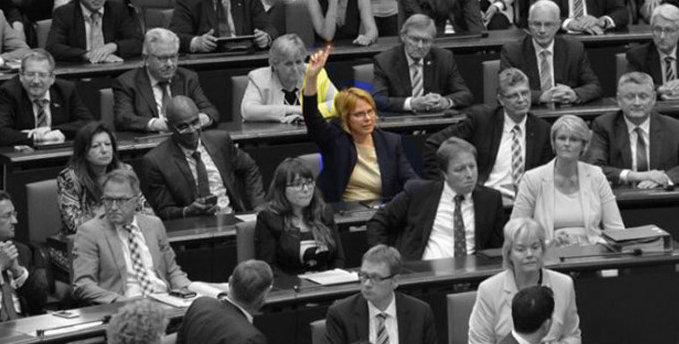 There is possibly not one German parliamentarian sufficiently well informed to pass judgment on what happened to the Armenians during the First World War. If there is such a person, he or she could never vote for such a resolution, given the mountain of evidence standing in the way of the claim of genocide.

In voting to ‘acknowledge’ the Armenian claim of genocide the Bundestag has taken a decision which is going to backfire in all sorts of practical ways. The central issue, however, is truth. There is possibly not one German parliamentarian sufficiently well informed to pass judgment on what happened to the Armenians during the First World War. If there is such a person, he or she could never vote for such a resolution, given the mountain of evidence standing in the way of the claim of genocide.

The resolution refers to the ‘almost complete extermination of the Armenians’ and the ‘pogroms’ against other Christians, namely the Assyrians and Chaldeans. In fact, hundreds of thousands of Armenians survived the war, in the Ottoman Empire and surrounding lands.   The figure of one or 1.5 million ‘massacred’ is a double untruth because the true death toll was probably about 600,000, still a huge number, without any need of exaggeration.   This was the figure given by the victorious powers after the war. If it has been bumped up in recent decades, that is because Armenian lobbyists and propagandists need the higher figure to justify their claim of genocide.

Furthermore, those who died were not all ‘massacred’: many were but by far the greater number died of exposure, disease or malnutrition or were killed in combat, the exact combination of causes which took the lives of about 2.5 million Ottoman Muslim civilians during the war. There is no mention in this resolution of the Muslim death toll or of the slaughter of Muslims by Armenians, especially when northeastern Anatolia was occupied by the Russians and their Armenian protégés between 1916-18. The archival evidence of survivors indicates that at least 500,000 Muslims were massacred between 1914-19. There are many Ottoman documents dealing with these terrible events and the absolute sadism and savagery of Armenian bands. There is no shortage of detail on what they did to their Muslim victims: the evidence comes not from one source but from many sources across eastern Anatolia. Neither is there any mention of the Muslims driven out of the Caucasus or eastern Anatolia by the Russian army and/or Armenians during the war. A German parliament expresses sympathy for Christian victims of Muslims but not sympathy the Muslim victims of Christians. They do not even rate a mention. It accuses ‘the Turks’ of genocide but not Armenians, when the evidence indicates that such a claim could easily be made against them on the basis of evidence sitting in the Ottoman and Russian archives?

The resolution wants Turks to face up to the expulsion and massacre of Armenians. In fact, while there is disagreement over numbers and use of the word ‘genocide’, Turks, generally speaking, have already acknowledge the large-scale killing of Armenians by their forebears. It is the Armenians who need to face up to the slaughter of Muslims by their ancestors, not just in Anatolia but across the border in Azerbaijan. As long as the Armenians are encouraged by parliamentarians to cling to their own partisan view of history they will never to have to engage with their own dark history: far from reconciliation being brought closer it will be pushed further away.

Armenian political committees and a section of the Ottoman Assyrian Christians threw in their lot with the Russians and were properly regarded by the Ottoman authorities as traitors. They gambled on a victory in which Russia would share and they lost in 1917 when the Bolsheviks pulled Russia out of the war. Tens of thousands of Ottoman Armenians sabotaged the war effort of the Ottoman government from behind the lines. By turning against the Ottoman government they jeopardized the safety of all their co-religionists. Severe losses on the battlefront deprived the Ottoman military command of the manpower needed to staunch attacks on lines of communication and supply as well as Muslim towns and villages. It was for this reason that the army recommended the ‘relocation’ of the Armenian population from the war zone at the end of May, 1915. The general staff believed that Armenian attacks were jeopardizing the entire war off.

Claims of genocide are also made by Ottoman Greeks, many of whom sided with the Greek army during the joint attack on the Ottoman state by four Balkan states (Serbia, Montenegro, Bulgaria and Greece) in 1912. Greece attacked again in 1919, launching what Arnold Toynbee called a ‘war of extermination’ against the Turks. These events fell within the period (1914-1923) in which the Ottomans were said to be committing genocide against the Armenians, yet have no place in parliamentary genocide resolutions or the studies of the international network of ‘genocide scholars. The same scholars show no interest in the ethnic cleansing of Muslims from the Balkans, the Caucasus and eastern Anatolia from early in the 19th century until the end of the First World War. Millions were massacred or driven out of their homelands for the simple reason that they were Muslim.

Some of the eastern Anatolian provinces were depopulated of up to 60 per cent of their Muslim inhabitants during the First World War. Returning Ottoman forces encountered scenes of horror, the bodies and body parts of Muslims strewn through ruined towns by Armenian killers. As can be seen from these events, the ethnic cleansing of about one million Azerbaijanis from the Nagorno-Karabagh enclave by Armenians in 1991 and the Khojaly massacre of 1992 did not occur in a historical vacuum but within the context of earlier massacres and attempts at ethnic cleansing.

Like many other such resolutions the German declaration gives April 24 as the start of the ‘genocide’, whereas the far more important date is a week earlier when Armenians launched an uprising in Van, overthrowing the government by early May and handing the city over to the Russians. In the process tens of thousands of Muslims in the city and the villages around the lake were slaughtered. Tens of thousands more Muslim villagers poured out of the Van province to get away from the advancing Russian army and Armenian gangs. Such events have no place in the mainstream ‘genocide’ narrative for the obvious reason that they would spoil it. In ignoring the tremendous suffering of the Muslims throughout the war the German parliamentarians reveal the mindset of 19th century orientalists.

Much of the mainstream narrative on the Armenian question is based on lies or wild exaggerations. No decision was ever taken to ‘exterminate’ the Armenians. The ‘evidence’ produced by people like Taner Akcam is laughable and the fact that it could even see the light of day is the real evidence – of the ignorance and bias of mainstream publishers and their failure to maintain proper academic standards when it comes to this issue.

While holding the Ottoman government responsible, the Bundestag resolution does not mention the responsibility of the Ottoman Armenian committees or the three powers – Russia, Britain and France – who encouraged and armed the Armenians and Assyrians for their own selfish reasons. Furthermore, in blaming ‘the Turks’ or the wartime Ottoman government, German and other parliamentarians ignore the fact that the killers of Armenians in the eastern Anatolian provinces were often tribal Kurds. Why, after living in reasonable amity for hundreds of years, were Kurds killing Armenian Christians? Because the Armenians had been killing them: in a tribal society nothing but revenge could be expected when the time was right.

The Ottoman archives contain many documents instructing provincial officials to make sure the ‘relocation’ was properly handled. When the central government received news that the Armenian convoys were being attacked it instructed provincial authorities to tighten security and make sure the perpetrators were punished. These documents stressed that the only object of the ‘relocation’ was only to move the Armenians. The determination of the government to prevent the situation from worsening is very clear. In the autumn of 1915, with attacks on the Armenians continuing, it set up three commissions of inquiry into the crimes that had been committed. They recommended the court-martials of more than 1600 people: more than 50, including senior provincial officials, were sentenced to death and hundreds of others were imprisoned.

Great crimes were committed during the First World War and its aftermath, not just by ‘the Turks’ but by Armenians, Greeks and Kurds. More than a century has passed but objectivity has long since been lost in a swamp of politics and propaganda. If Kurds don’t want the Turkish government to be let off the hook over the Armenians, that is because of what is happening in the southeastern Turkey now, not what happened there more than a century ago. For Armenians and many Kurds the common enemy are the Turks, so it is only they who are to be held solely responsible.

Genocide is the most serious accusation that can be made against a national group and one that should only be made when the facts are crystal clear and beyond plausible challenge. This is clearly not the case with the Armenian genocide claim. Picking up on the German resolution the editorial committee of the New York Times has handed down its own judgment. Overlooking the ethnic cleansing/genocide of the Herero and Nama people of southwest Africa (by German colonial administrators) from 1904-7 and the ethnic cleansing of Muslims from southeastern Europe during the Balkans war (1912-13), it says the Armenians suffered the first genocide of the 20th century. As the editorial committee of the New York Times is not known for any specialized knowledge of late Ottoman history, this declaration is fatuous. German politicians seem to think they are doing some good with this resolution but they are not. Their vote was a victory for propaganda and lobbyists and a defeat for truth in history. It deserves to be rejected out of hand.