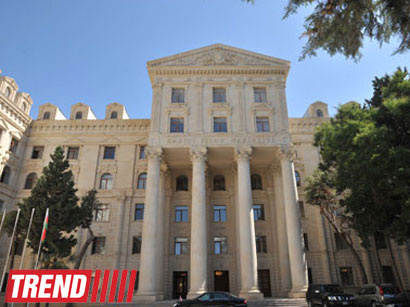 The statements about peace, moral and ethical values made by the Armenian leadership, which committed the gravest crimes and ethnic cleansing against Azerbaijani people and which was directly involved in preparation and committing the Khojaly genocide, is an example of extreme hypocrisy, spokesman of Azerbaijani Foreign Ministry, Elman Abdullayev said on Feb. 17.

Abdullayev made the remarks commenting on the speech of Armenian President Serzh Sargsyan.

Abdullayev said the Armenian leadership, who committed ethnic cleansing against all the peoples living in Armenia, as well as bloody purges against the population in Azerbaijan’s occupied territories, has no moral right to bring charges against Azerbaijan.

“Was not it Serzh Sargsyan and his predecessor Robert Kocharian who spoke about “ethnic disparity”? Was not it Serzh Sargsyan, who addressing the youth incited it to pay attention to the neighbouring states’ territories and to large bloody wars in the future to create a “Greater Armenia”? As a result of this racial policy and the policy of hatred against other nations, Armenia became a mono-ethnic state,” the spokesman said.

He said hundreds of thousands of Armenians were forced to leave the country due to the politics of Armenian leadership, which so persistently speaks about “freedom” and “patriotism”.

“As Armenian public figures stressed, the Armenian government commits a “white genocide” against its own people, and as a result it is responsible for the fact that hundreds of thousands of Armenians were forced to leave the country and live in other countries as migrants,” Abdullayev said.

He went on to add that the Armenian leadership, headed by Serzh Sargsyan, instead of making anti-Azerbaijani and racist speeches, should pay attention to the Armenian population, 40 percent of which live in extreme poverty.

Azerbaijani people, unlike Armenia, have maintained their tradition of multiculturalism and tolerance, and Azerbaijan today is perceived as a model of tolerance, the ministry’s spokesman said.

“The fact that many peoples, including Armenians, live in Azerbaijan and that they are able to benefit from Azerbaijan’s development, speaks about high moral qualities of the Azerbaijani people. But Sargsyan should not forget that Azerbaijan will never allow to create a second Armenian state on its territories, and sooner or later the occupied lands will be liberated, and Azerbaijan will provide its territorial security, sovereignty and inviolability of its borders,” Abdullayev said.

It should be noted that Armenian president speaking on Feb. 15 at the Yerkrapah Volunteer Union Congress accused Azerbaijan on what is happening on the frontline.

The conflict between the two South Caucasus countries began in 1988 when Armenia made territorial claims against Azerbaijan. Armenian armed forces have occupied 20 per cent of Azerbaijan since 1992, including the Nagorno-Karabakh region and seven surrounding districts.

Azerbaijan and Armenia signed a ceasefire agreement in 1994. The co-chairs of the OSCE Minsk Group, Russia, France and the U.S. are currently holding peace negotiations.

Armenia has not yet implemented the U.N. Security Council’s four resolutions on the liberation of the Nagorno-Karabakh and the surrounding regions.