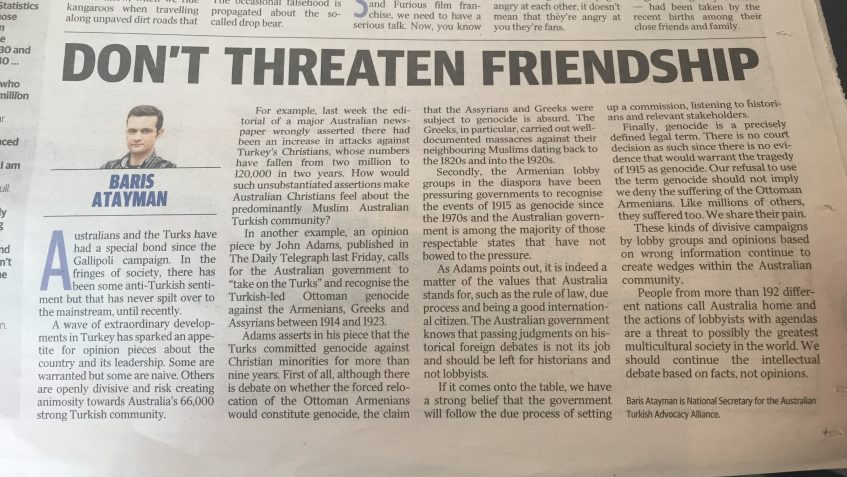 As published on the Daily Telegraph on August 12, 2o16:

Australians and the Turks have had a special bond since the Gallipoli campaign. In the fringes of our society, there has always been some anti-Turkish sentiment but that has never spilled over to the mainstream, until recently.

A wave of extraordinary and unprecedented developments in Turkey has sparked an appetite for opinion pieces about the country and its current leadership. Some of these are warranted but some are genuinely simple & naive. Others are openly divisive and risk creating animosity towards Australia’s 66,000 strong Turkish community.

For example, last week the editorial of a major Australian newspaper wrongly asserted that there had been an increase in attacks against Turkey’s Christians, whose numbers have fallen from 2 million to 120,000 in two years. How would such unsubstantiated assertions make Australian Christians feel about the predominantly Muslim Australian Turkish community?

In another example, an opinion piece by John Adams, which was published in the Daily Telegraph last Friday, calls for the Australian government to ‘take on the Turks’ and recognise the Turkish-led Ottoman genocide against the Armenians, Greeks and Assyrians between 1914 and 1923.

Adams asserts in his piece that the Turks committed genocide against Christian minorities for over nine years.

First of all, although there is an ongoing debate on whether or not the forced historical relocation of the Ottoman Armenians would constitute genocide, the claim that the Assyrians and Greeks were subject to genocide is absurd. The Greeks in particular carried out well-documented massacres against their neighboring Muslims dating back to the 1820s and into the 1920s.

While Adams is entitled to his own opinion and has a right to express it freely, he does not have the right to make up historical facts. His piece, based on a false understanding of history and incorrect information about contemporary events in Turkey, serve only one purpose: vilifying the Australian-Turkish community.

Secondly, the Armenian lobby groups in the diaspora have been pressuring governments to recognise the events of 1915 as genocide since the 1970s and the Australian government is among the majority of those respectable states that have not bowed to the pressure.

As Adams points out, it is indeed a matter of the values that Australia stands for, like the rule of law, due process and being a good international citizen.  The Australian government knows that passing judgments on historical foreign debates is not its job and should be left for historians not lobbyists. If it comes onto the table, we have a strong belief that the government will follow the due process of setting up a commission, listening to historians and the relevant stakeholders.

Finally, genocide is a precisely defined legal term. There is no court decision as such since; there is no evidence that would warrant the tragedy of 1915 as genocide. Our refusal to use the term genocide should not imply that we deny the suffering of the Ottoman Armenians. Like millions of others, they suffered too. We share their pain.

These kinds of divisive campaigns by lobby groups and opinions based on wrong information continue to create wedges within the Australian community. People from more than 192 different nations call Australia home and the actions of these lobbyists with agendas are a threat to possibly the greatest multicultural society in the world. We should continue the intellectual debate based on facts, not opinions.