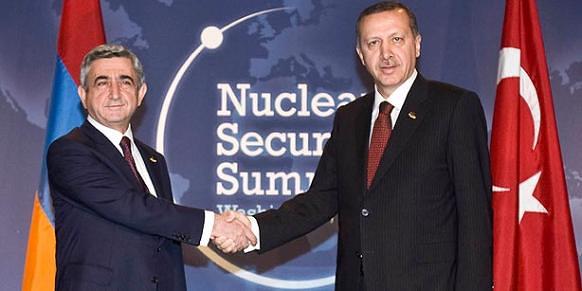 While the West and Armenians in Turkey have welcomed a statement from Prime Minister Recep Tayyip Erdoğan regarding the events of 1915 on the eve of their 99th anniversary, in which he extended condolences from Turkey to Armenians for the first time in the history of the Turkish Republic, Armenia does not seem satisfied.

You can read the statement of the Turkish PM here

Armenian President Serzh Sarksyan made a statement on Wednesday regarding the 1915 events, but he did not mention Erdoğan’s statement made earlier the same day. Sarksyan said Turkey is in “utter denial” of what Armenia sees as genocide under Ottoman rule 99 years ago.

In a historic first for the Turkish Republic, Erdoğan extended condolences to the grandchildren of Armenians who lost their lives in 1915. His surprising statement came just one day before April 24, when Armenians commemorate the events they describe as genocide under Ottoman rule. The statement was issued by the Prime Ministry on Wednesday in nine languages — Turkish, German, French, English, Spanish, Russian, Arabic, Western Armenian and Eastern Armenian — in a move to make a sure the statement is heard and understood by a wide audience.

“It is our hope and belief that the peoples of an ancient and unique land, who share similar customs and manners, will be able to maturely talk to each other about the past and to remember their shared losses in a decent manner. And it is with this hope and belief that we wish that the Armenians who lost their lives in the context of the early twentieth century rest in peace, and we convey our condolences to their grandchildren,” said the statement.

“Regardless of ethnic or religious origins, we pay tribute with compassion and respect to all Ottoman citizens who lost their lives in the same period and under similar conditions,” Erdoğan added.

Sarksyan underlined: “[1.5 million] Armenians fell prey to a crime that did not have a name at that time. Nor had any human language coined such an expression or a term yet. They were killed simply because they were Armenians. The crime, designed minutely and in advance, pursued a clear goal to take possession of the home country, the property and the 100-year-old heritage by exterminating the native people living there. This way, they committed a monstrous crime, seeking to once and forever annihilate Armenians as a political factor.”

Sarksyan said the “Armenian genocide” was not initiated nor put an end to on one specific day, adding: “Moreover, it is [still] alive so long as the successors of Ottoman Turkey continue their policy of utter denial. We are convinced that the denial of a crime constitutes the direct continuation of that very crime. Only recognition and condemnation can prevent the repetition of such crimes in the future.”

With only a year remaining before the 100th anniversary of the “Armenian genocide,” Sarksyan said Turkey can repent and to set aside the historical stigma if they try to set their state’s future free from this heavy burden. “At the same time, I publicly reaffirm that we do not consider Turkish society to be an enemy. Bowing to the memory of the innocent victims, we remember all those Turks and Turkish families who lent a helping hand to their Armenian neighbors and friends, [to protect them from] being annihilated by the barbarians, and [those who] helped numerous Armenian children escape from the clutches of mobs,” he said.

Sarksyan also mentioned the Armenians living in the town of Kessab in Syria. “Today, the Armenians of Syria are in trouble. This is an open wound and the issue is of primary concern for us. We are doing our best to re-establish peace for Syrian people and our compatriots in Syria,” he added.

Stressing that centennial of the events should have symbolic importance for Turkey, Sarksyan said, “The attitude [of Turkey] toward Armenia can no longer be measured by words, because it requires clear steps: the opening of closed borders and the establishment of normal relations.”

A group of Armenians burned Turkish flags in protest of the 1915 killings of Armenians in Yerevan on Thursday. Russian press outlets reported that a group of protesters chanted slogans calling on Turkey to recognize the “Armenian genocide.” Then the protesters burned a Turkish flag with torches.

French President François Hollande attended an “Armenian Genocide” commemoration ceremony on Thursday in Paris, near a monument to Soghomon Soghomonian, commonly known as Komitas, who was an Armenian priest, composer, choir leader, singer, music ethnologist, music pedagogue and musicologist. Hollande attended the commemoration ceremony for the first time since his election to the presidential post in 2012.

“Prime Minister Erdoğan, in his statement today, attempts, in vain, to escape responsibility for the Armenian Genocide, by somehow downgrading this still unpunished international crime to the level of a simple, unresolved bilateral conflict. Neither the facts nor any of the world’s commonly accepted codes of law or morality support this twisted view,” Hamparian said, adding, “The fact remains that, as this cold-hearted and cynical ploy so plainly demonstrates, Turkey is, today, escalating its denial of truth and obstruction of justice for the Armenian Genocide.”

The US Department of State has welcomed Erdoğan’s statement on the events of 1915. “We welcome Prime Minister Erdoğan’s historic public acknowledgement of the suffering that Armenians experienced in 1915”, said US Department of State Spokesperson Jen Psaki on Wednesday. “We believe this is a positive indication that there can be a full, frank and just acknowledgement of the facts, which we hope will advance the cause of reconciliation between Turks and Armenians,” Psaki added. She further stated, “We think it was a positive step.”

European Commissioner for Enlargement and European Neighborhood Policy Stefan Füle also welcomed Erdoğan’s statement with a message on his personal Twitter account on Wednesday, saying “reconciliation is key EU value” and that he hopes “steps in this spirit will follow.”

Archbishop Aram Ateşyan, deputy patriarch of the Armenian Patriarchate, based in İstanbul, said Erdoğan’s statement was “exciting and historic.” According to Turkish press reports on Thursday, Ateşyan said the prime minister’s statement helped to ease the pain of Armenians. He welcomed the statement and thanked Erdoğan for it, adding that this statement will be the foundation for a friendship between Turks and Armenians. “For the first time, we are hearing such a statement from a top Turkish official. This statement will make Turkish Armenians and Armenians around the world happy. This is a start of beautiful days and the start of a friendship bridge,” Ateşyan said.

Following his statement on the 1915 events, Erdoğan attended a reception fort he National Sovereignty and Children’s Day celebrations at Parliament. Erdoğan said: “We will be waiting for a statement from the US tomorrow. I do not expect a different statement than those from the past. This will help the normalization process [between Turkey and Armenia].”

Stressing there is a need for normalization in the Middle East, Erdoğan also said he hopes there will be steps taken to stabilize Turkish-Israeli relations in 2014-2015 and added that the Foreign Ministry is working hard for that. When asked if Turkey would open its border with Armenia in order to establish diplomatic relations, Erdoğan stressed that without a solution on some issues, such as that surrounding Nagorno-Karabakh, Turkey can’t approve of opening the border.

Nagorno-Karabakh is a disputed enclave between Azerbaijan and Armenia. Armenia occupied 20 percent of Azerbaijani territory in the early 1990s, including Nagorno-Karabakh, which is primarily populated by Armenians, and seven adjacent provinces. Diplomatic efforts to find an enduring solution to the conflict have failed for the past 20 years, but Azerbaijan vows to get its territories back by force, if necessary.

Turkey closed its borders with Armenia in 1993 in solidarity with Azerbaijan. The issue of Armenia’s withdrawal from the area surrounding Nagorno-Karabakh is of importance to Ankara, which has frequently signaled that this step would ease the way for the reopening of the border with Armenia.

Speaking to journalists at the same reception, Foreign Minister Ahmet Davutoğlu said the prime minister’s statement was not issued under pressure by anyone and that it should be seen as a “call” to Armenians. Stressing that Turkey is attempting to share the pain of Armenians, Davutoğlu expressed his hope hat Armenians would positively respond to the prime minister’s call so that Turks and Armenians can build a future and make history together.